The Central Europe Technology Fast 50 ranks the region’s fastest-growing tech companies, based on revenue growth over a four-year period.

The speed of growth among Central Europe’s technology companies continues to accelerate, with average growth between 2013 and 2016 delivered by the companies featuring in the 2017 Deloitte CE Technology Fast 50 ranking hitting a new record of 1,127 per cent. 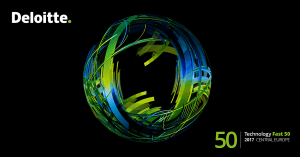