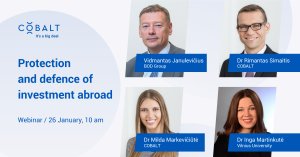 “Protection and defence of investment abroad” on 26th of January at 10 am.

This year, a number of companies faced extraordinary challenges. At the beginning of the year, Lithuania announced its intention to open a representative office in Taiwan, “accidentally” (and later on purpose) deleting itself from the Chinese customs systems. Less than a couple of months later, Russia started a war against Ukraine on a scale not seen in Europe since the World War II. The dispute with Beijing was never resolved: as a result, some Lithuanian companies refused to work with China, while others stopped or did not even start their operations in Lithuania. Soon the first sanctions were announced against Russia and new challenges arose for business considering how to withdraw from Russia and the countries that support it. In November, Minsk threatened to nationalize the companies of investors from “unfriendly countries”. Recently, public news appeared that companies with businesses and shares in Belarus have already written off these investments as losses.

In the context of all these events, the issues of protection of investments abroad have become extremely relevant. These issues will be discussed at the webinar. During the event, we will tell you how investors can defend and protect their investments. We will discuss in more detail the ICSID Convention and its benefits, as well as other aspects of investment defense and the specifics of their application in problematic jurisdictions.

We invite you to ask relevant questions during the live broadcast.

KPMG firms operate in 143 countries and territories, and collectively employs more than 265,000 partners and people, serving the needs of business, governments, public-sector agencies, not-for-profits and through KPMG firms’ audit…

‘VIP Catering’ is a catering brand established by a long-term company UAB Star Constellation  in Vilnius in 2001. It offers full catering services and focuses individually on the needs of…

JSC Lietmeta is a manufacturing company of corrugated cardboard! They offer various sizes sheets, covers, inserts, boxes, and more. In order to ensure the highest quality of products, LIETMETA carries…