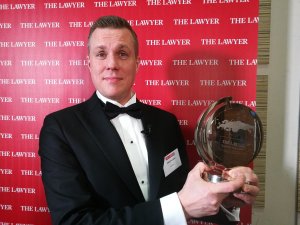 On 16 March, Sorainen was awarded the title of “Baltic Law Firm of the Year” by The Lawyer – the third time that the Sorainen team has been honoured with this recognition. As Catrin Griffiths, editor of the publication, noted: “this year The Lawyer European Awards focused on and recognised the growing importance of cross-border instructions to firms across the continent. Sorainen demonstrates these qualities in a profound way”.

Aku Sorainen, founder and senior partner of the firm, said that it is synergising the resources of all four offices in the Baltic States and Belarus that enables Sorainen as a law firm to provide seamless service to clients in local and cross-border assignments: “This strength of ours makes the firm a standard choice especially for regional projects and for clients with operations in several countries where we operate. We owe our continuous growth to being the only fully integrated law firm in the Baltics and Belarus with a solid collegial partnership. I am proud that our one-firm approach is an international award-defining quality.”

Among key criteria that the judging panel evaluated was evidence of a strong international clientele, strategic development and growth. 2016 was a phenomenal year for Sorainen, with a track record worthy of international attention. The Sorainen team had the privilege to be legal advisers in a number of ground-breaking transactions such as:

In 2016, Sorainen was named “European Law Firm of the Year” at The Lawyer European Awards as the first law firm in the Nordic and Baltic countries to have won the title.

The award winners were chosen by a panel of judges, including managing partners of international law firms and in-house lawyers with multinational companies. Nominees were selected in 24 categories. The awards, now in their eighth year, were the first initiative of their kind to reward and celebrate excellence across the European legal market.